First announced back in January of 2017, FlyTampa has finally brought Las Vegas McCarran Airport to the sim world, and the strip along with it. McCarran International Airport is the main airport for Las Vegas, just a few short miles away from the strip. First opened in 1942, with the first commercial flight operated from the airport in 1948, the airport has grown to handle over 49 million passengers a year. Las Vegas serves as a focus city for Frontier, Southwest, Spirit and Sun Country. It is also the main base for Allegiant Air. Vegas is also home to Janet Airlines which shuttles workers to and from Area 51.

Installing Vegas is straight forward. The FlyTampa Universal installer needs to be downloaded, and after that, all that is required is your email and serial. From there, you then confirm which version of the scenery will be downloaded, and you are on your way. Updating the scenery is simple as well. Simply run the universal installer again, input your information, and you will be able to select the newest version of the scenery to be installed.

The scenery is automatically added to your sim through the new addon system. The installer also takes care of installing SODE, making the entire installation process very easy.

The FlyTampa Configurator comes with many options to choose from to customise the scenery. The configurator divides these options into two sections: one for the airport, and one for the city. With the airport options, you are able to change things ranging from toggling static aircraft, the type of glass transparency for the terminal to apron details, and more. The city options allow the user to control where animated vehicles will appear, the animations of the billboards and lights, as well as toggle the Bellagio fountain, Mirage volcano, and more. With the options turned to the lowest option, Vegas still offers a great experience visual experience.

The documentation that comes with the scenery includes frequencies for the airport, some recommended settings, and an FAQ that can be used to help troubleshoot some problems you may have. Simple, but adequate for what you might need. The documentation is located within the FlyTampa folder where the scenery is installed. New users might have a hard time finding the documentation, but experienced simmers should have no problem finding it.

The airport is full of details, and is possibly one of the most detailed commercial airports that I have used in the simulator. The terminals, FBOs, and textures have lots of little details that bring the realism of this airport to another level.

The texturing all over the airport is very well done. The older terminals have signs of age on the exterior while the newer terminal have little to no signs of aging at all. The details on the taxiways and runways are outstanding, and look very similar to the real thing. Details such as cracks and chipped paint can be found all over the airport which adds some great age to the older parts of the airport.

Whilst textures are overall all good, there is an issue with a part of the airfield. Ramp 7 has an issue where the texturing is showing the correct elevation, but the terrain underneath is under the texture, causing aircraft to fall straight through the ramp. Other objects or textures around this area can show up through other textures and terrain, such as fencing, due to this issue. This issue affects for the whole ramp, but is the only issue with the airport terrain that I have found. This is a side effect of trying to model the sloped ramp. 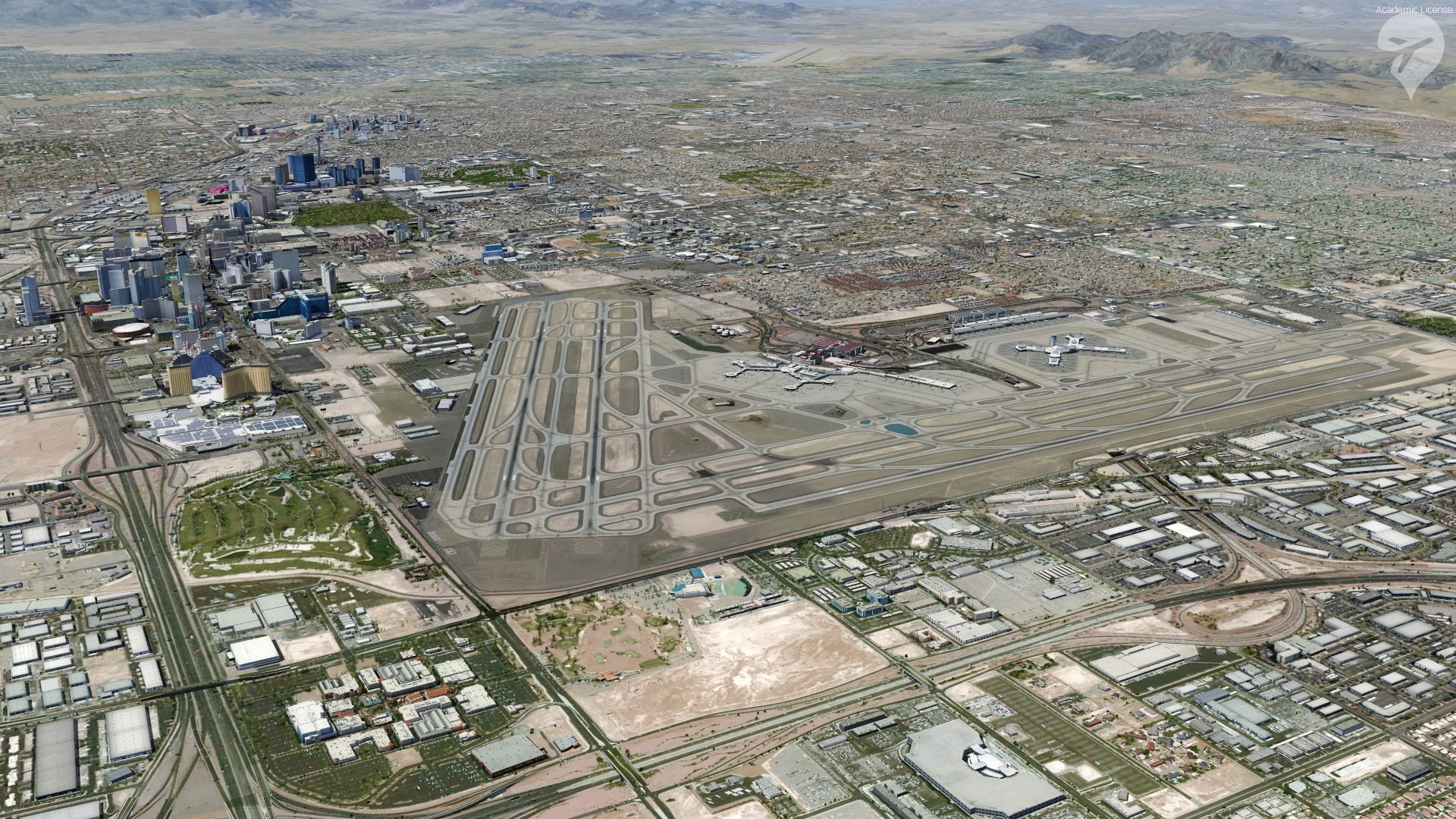 The modeling of the terminal is done with a high level of detail. All over the terminal, you can find units on top of the terminal, as well as nicely modeled ramp and FAA towers. The terminals include a very detailed interior with plenty of slot machines, and unique gate signs that line up with the correct gates. The terminal windows have three options: no transparency, standard transparency, and PBR transparency. All three look great, with the PBR option looking the most realistic with minimal performance impact with the PBR windows. All jetways can be switched between default and SODE, which works great at all the gates that I have tried.

Vegas is also home to a large number of FBOs (Fixed Base Operators) as a large number of private aircraft fly through McCarran, such as Sands’ 747’s, some helicopter tour companies, and the Janet 737’s. Each hangar is modeled and textured with a high level of detail and accuracy. There is not as much detail as the terminal area, and there are no hangar or FBO interiors, but is still very well done. While this is not the most used part of the airport for most simmers, FlyTampa has still put in a large amount of effort that will satisfy anyone flying a private jet into Vegas.

Vegas also includes quite a few static aircraft, helicopters and private jets. Some of these come with liveries, such as Southwest, Allegiant and Janet amongst others. All of these are lightly modeled and are not the most impressive static aircraft, but they do get the job done. Some of these models will disappear if you are too far away, but will reappear when you get close enough. I tried to find a setting in P3D to make the range larger, but I was unable to find a setting that changed this.

The night lighting on the airport looks great, but is a bit bright for my taste. However, the overall look is good. The color of the dynamic lighting changes from terminal to terminal. However, from my research, the terminal lighting is modeled off the old, orange style of lighting. Terminal A-D have an orange flood light, while the new terminal E has the new LED lights. The real world airport has the new LED lights at all terminals, which were installed in December 2017. This is hopefully something that can be updated in the future. Runway and taxiway lighting at night is some of the best I have seen with plenty of lights to show taxiways very clearly.

FlyTampa Vegas is not just an airport, and similar to their Dubai scenery, Vegas models most of the surrounding city and the entire Las Vegas strip. This is a great addition to the scenery. The buildings are all models with a level of detail that will surpass anyone’s expectations for a city. Little details such as the roller coaster at the New York and the new Resorts World hotel under constructions add a lot of realism to the city. The textures accurately represent all the hotels and casinos on the strip. During the day, the strip and city look pretty good, but when we shift to nighttime, it’s when the strip really comes to life.

Night lighting on the strip adds a whole other level to this scenery that I don’t think I have seen before. Having just been to Vegas a few months ago and having walked the strip at night, the resemblance to the real thing is astonishing. The buildings look twice as good at night, lighting up in brilliant fashion, like they would in real life. All the animated lights on landmarks such as the Luxor, the High Roller, the Bellagio Fountains, and the Mirage Volcano are absolutely incredible to look at. A lot of billboards are animated as well, showing advertisements that are very similar to what you would actually see in Vegas. There is also the addition of the monorail that travels around the city.

The strip and city are great additions to an already outstanding airport.

Moving on to performance: an aspect of a scenery that can make or break it. While the performance of Vegas does not break the experience with the scenery, it definitely comes close to doing so at times. The performance is, unfortunately, at times, very disappointing.

Testing out different settings with the configurator, I got some figures using a default aircraft and clear skies. With all of the options turned to max for both the airport and the city, the scenery averages around the mid to high 30s in FPS most of the time, with about a 5 FPS drop at night. Turning all of the options to the lowest or off, we see a good jump in performance up to the high 40s for most of the time. However, at night, it drops back down to the mid 30s. I found that turning off two options gave me the biggest FPS jump, and those are apron detail and apron traffic. It is important to keep in mind that this figure will drop depending on the quality of the aircraft you fly, most of time time I hover around the 20s with payware commercial aircraft.

The airport is still manageable in my opinion, but the performance definitely lacks compared to other products. With enough tinkering in the configurator, you are able to get the performance to a good spot for you to enjoy the experience with this beautiful scenery.

Overall, FlyTampa Vegas is a very beautiful scenery with an impressive amount of detail to both the airport and the city. Being a Prepar3D v4 exclusive, it is great to see the big step FlyTampa has taken to make the most out of the new capabilities within the sim, with the addition of PBR textures and dynamic lighting. 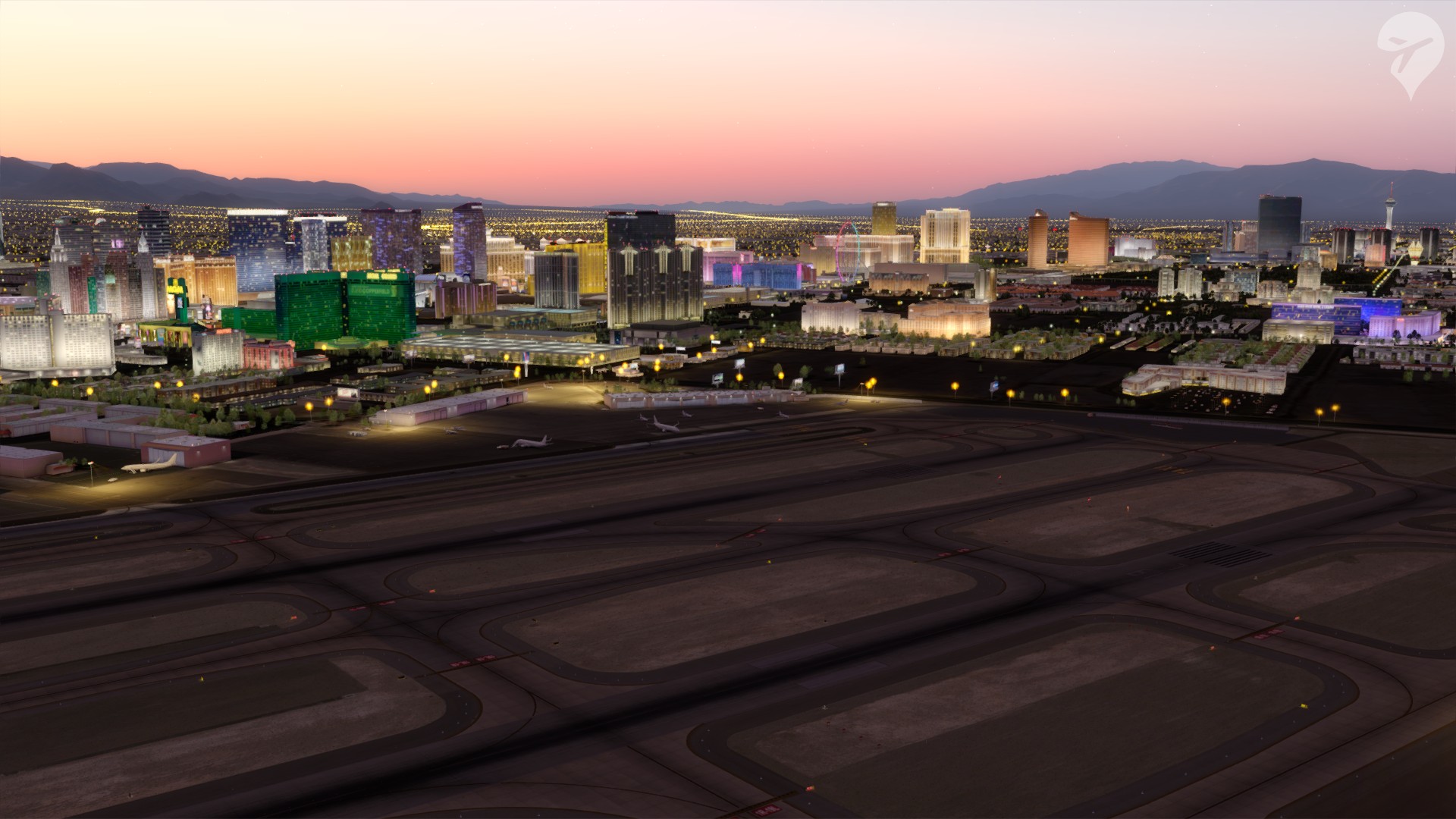 Though I was able to find some small bugs and a few inaccuracies, along with the below average performance, I don’t think this should keep you from picking up this scenery if you plan to fly through Vegas. Compared to the now 10 year old FSDreamTeam Las Vegas, this is a big step up in almost every single way.

Being sold for $32.00, I think the price is very reasonable for the amount of detail and the size of the area that is included with this product.

Turning Onto Finals
With Vegas being one of the major airports in the USA, with it being a home for many airlines with a high variety of airliners, FlyTampa has done an excellent job with Vegas. With all the positives and negatives taken into account, I can say FlyTampa's Las Vegas earns a solid 8.5.
8.5 Out of 10 How do we score? | Feedback?
Likes
Dislikes

I’ve been a very passionate flight simmers for over 12 years now and am one of the biggest AvGeeks you will meet. I make cinematic flight sim videos, and I also do a lot of real-world plane spotting in my free time. My favourite aircraft is the Boeing 747, and I always enjoy learning more and more about aviation and flight simming.