Orbx’s next airport for X-Plane 11, LOWI Innsbruck will be in your hands very soon, but in the meantime, we got in touch with developer Jarrad Marshall to talk about some of his favourite elements of the upcoming scenery. These brand new images have been specifically chosen by Jarrad, which have been decided upon by giving some glimpses into maybe the lesser-explored areas of the product. You can read what he has to say about each image down below. 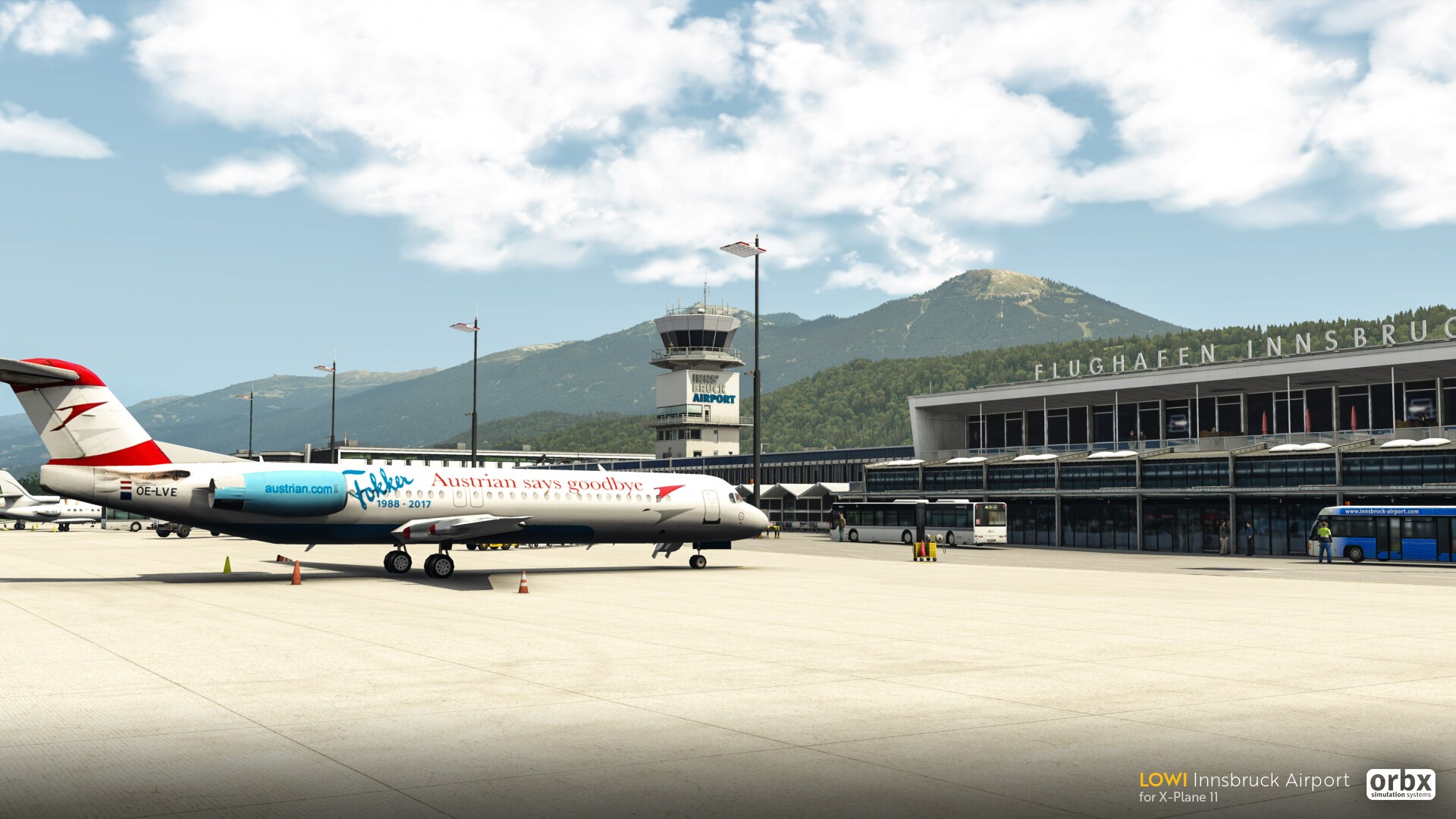 I always like to include location-specific statics with my airports – these are a performance-friendly way to add atmosphere alongside AI. Getting the types and skins right is important though; all the aircraft you see in this scenery are visitors to the airport in real life. Whilst this aircraft is no longer a regular at LOWI (aside from the occasional charter), I decided to keep the F100 in this latest version of the scenery as I’m just such a big fan of it. There is a brand new special livery just for the X-Plane 11 version however.  I know that many simmers prefer not using statics, so this (and all other aircraft at LOWI) can be disabled via the scenery control panel. Useless side note – many of the retired Austrian F100s have found their way to various regional airlines based at my home airport of Perth. 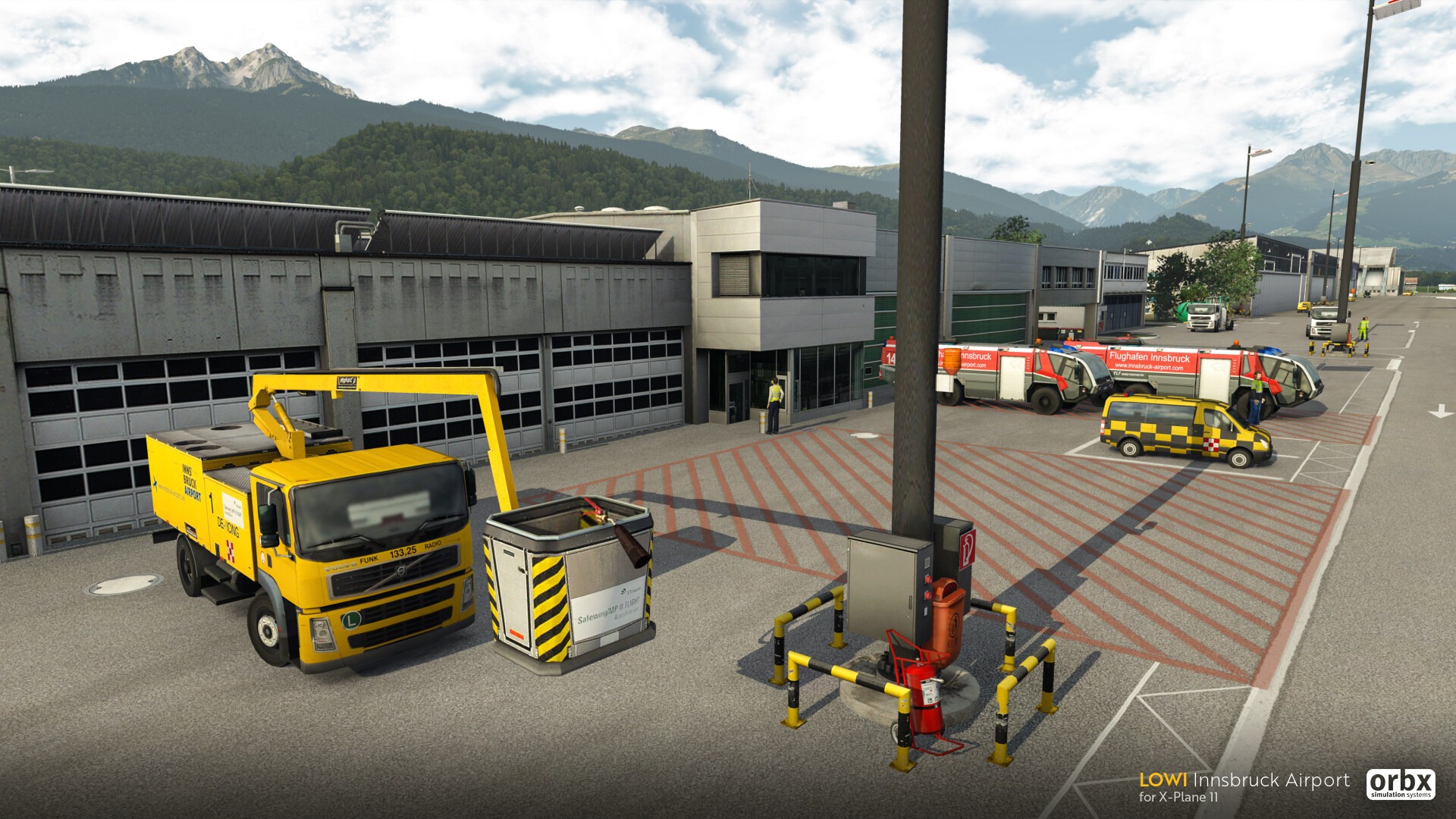 A couple of things in this pic. Firstly, all the vehicles you see in this shot were custom-built for this scenery – a fairly time-consuming process. Secondly, you’ll see that the roof here is a bit (unnecessarily) detailed – this was inspired by constant visits to the gorgeous (and UHD) Innsbruck Airport webcam. 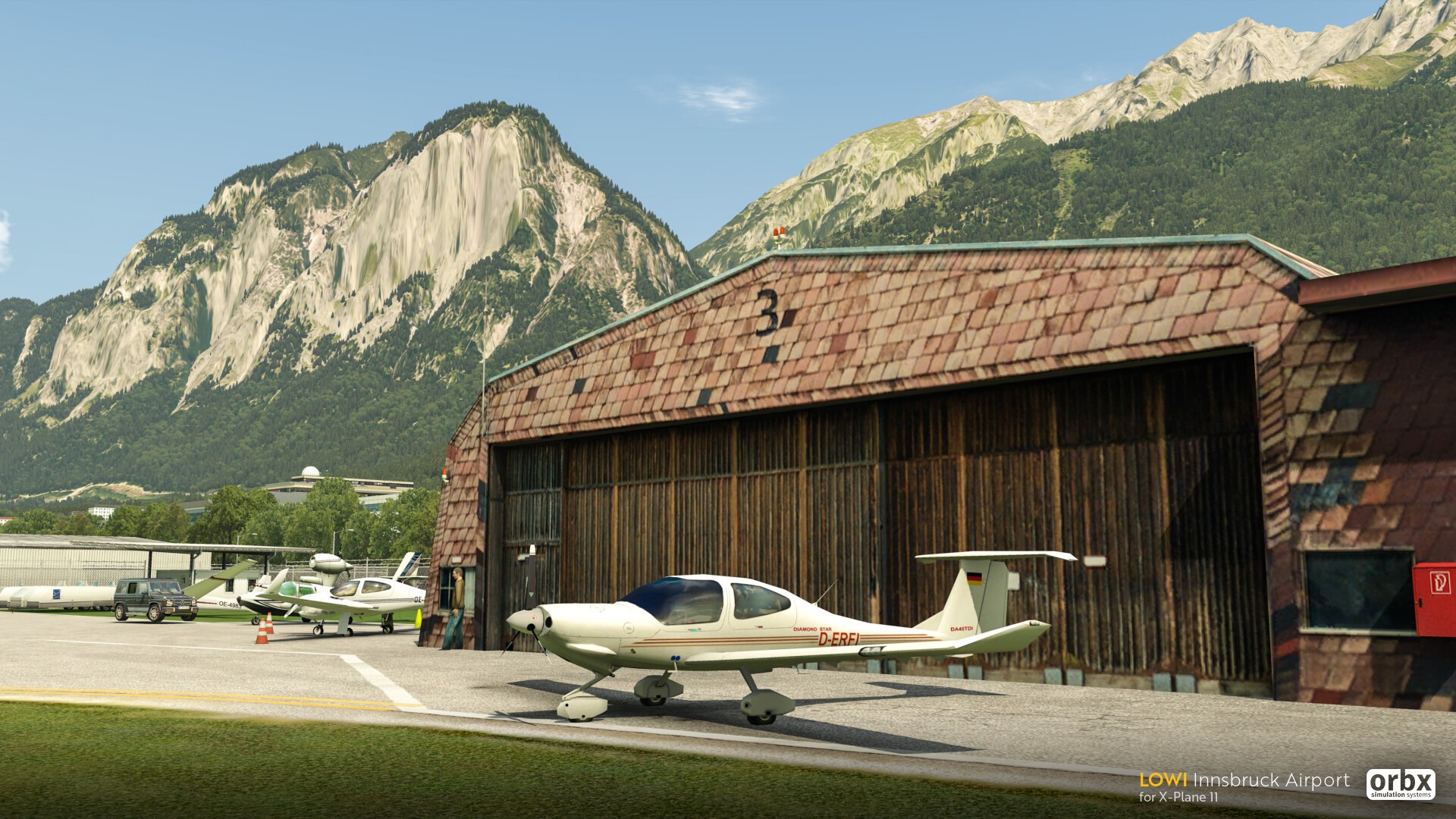 This hangar is very interesting – it is a historical (and protected) relic from the old airport, which was located on the opposite side of the city. When the new airport was constructed, they decided to dismantle and move it to the new location. The aircraft depicted here also has a personal connection for me – a friend of mine (and one of three on-site photographers for this project) is a pilot in Innsbruck, and when I visited a few years ago, I was lucky enough to go for a spin around the alps in this aircraft. (note for you – the pic from the Dev Month interview is of this aircraft). 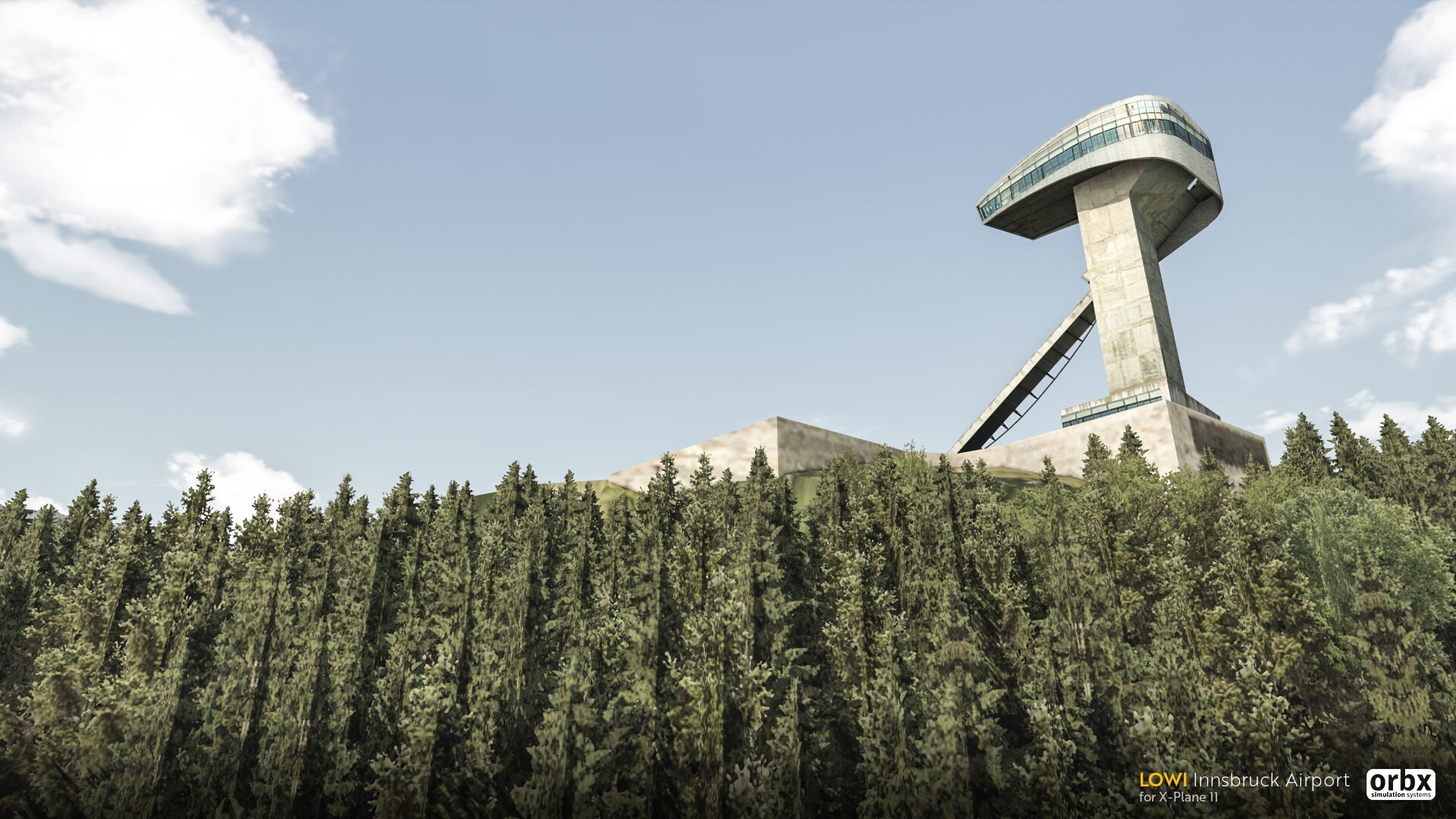 This is the Bergisel Ski Jump, probably the most iconic landmark in Innsbruck, home to the 1964 & 1976 Winter Olympic Games. 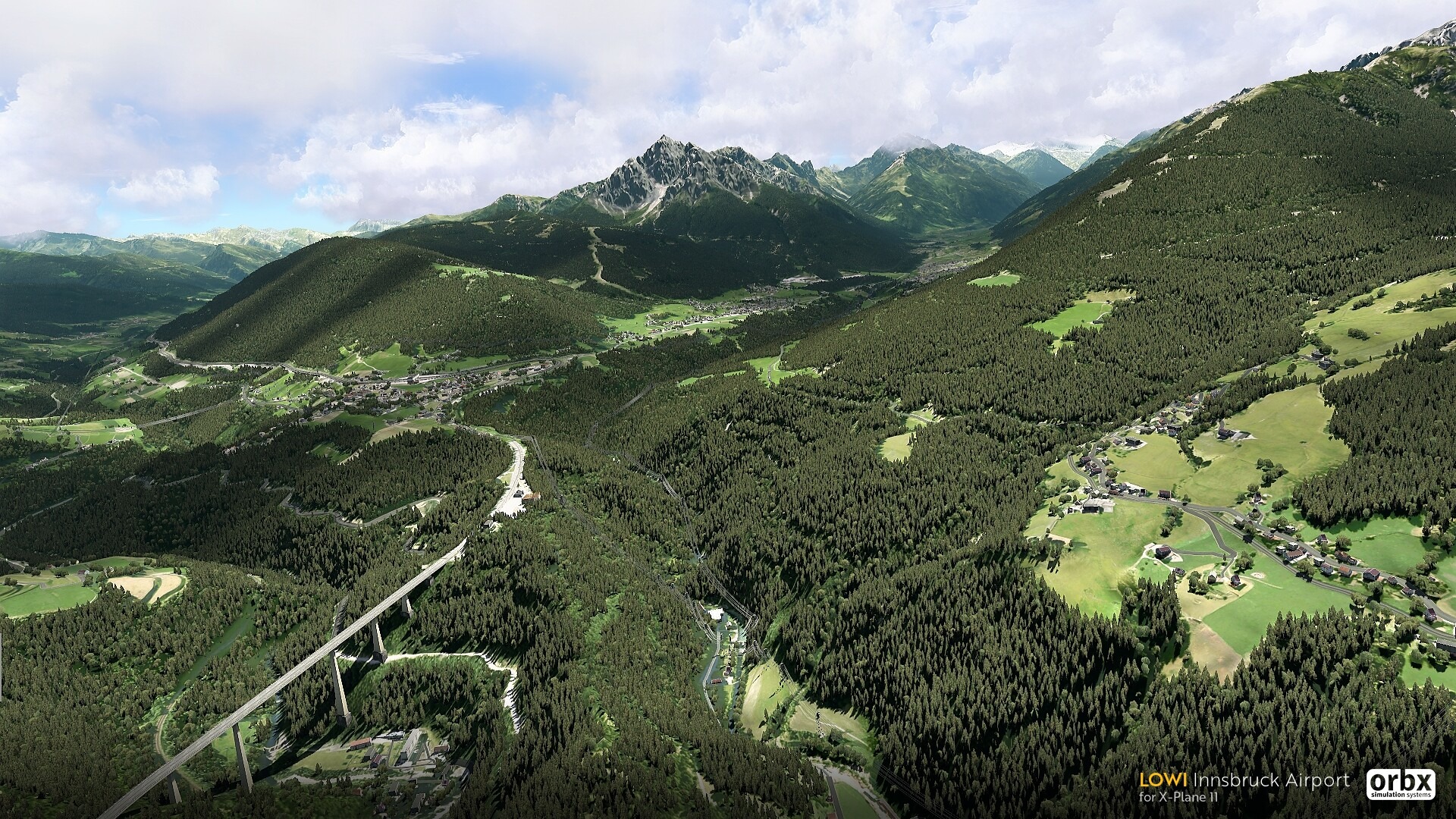 Whilst ostensibly a nice shot from John Lovell of the alps looking down the Brenner Pass towards Italy, this also includes a sneaky view of the Europa Bridge. This is one of the tallest bridges in Europe and is the perfect landmark to test your low-flying skills. 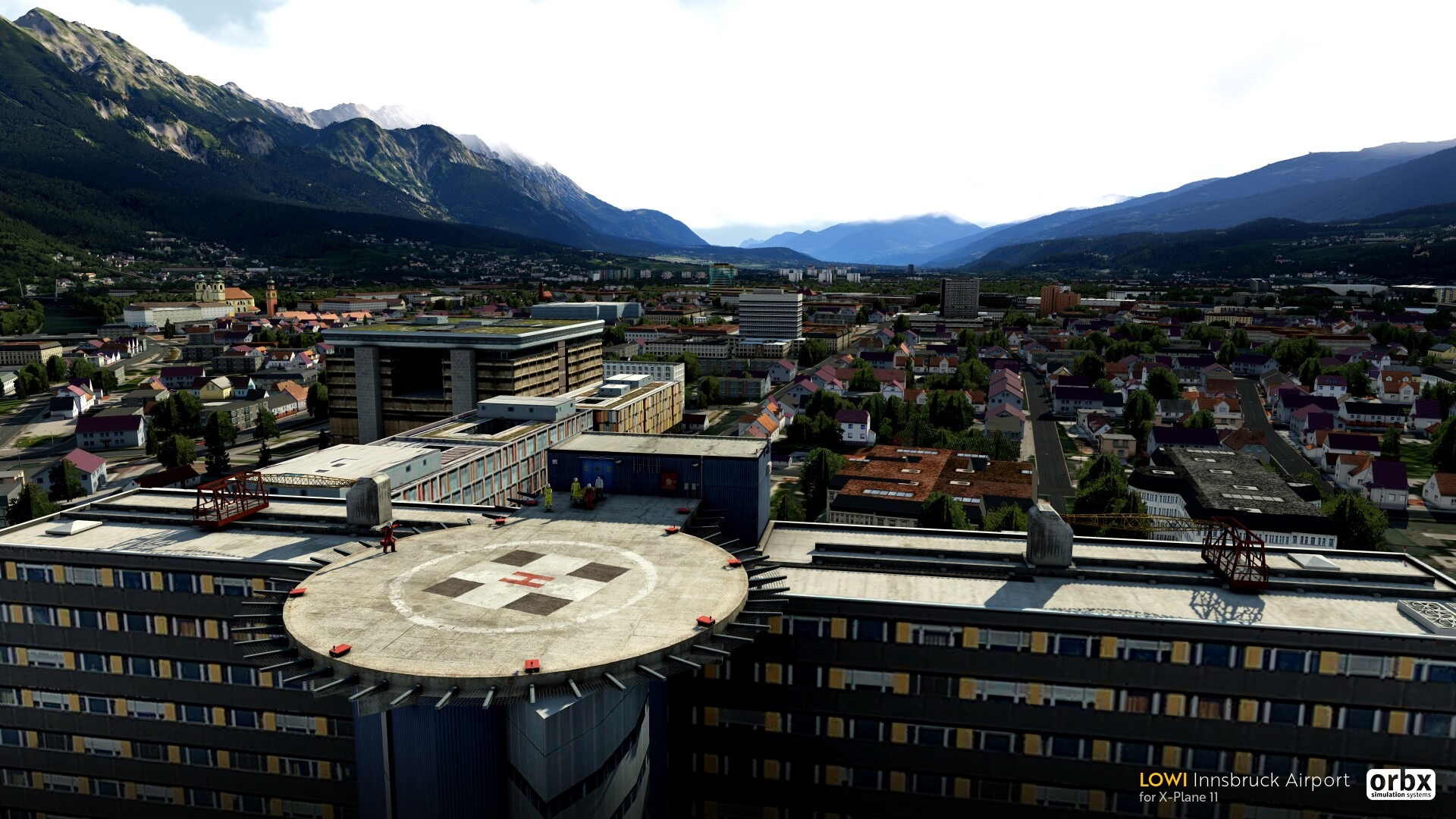 The University Klinic (University Hospital) heliport is located smack dab in the middle of the city. I always like to include a few helicopter landing spots as these are always an excellent way to explore any detailed scenery. 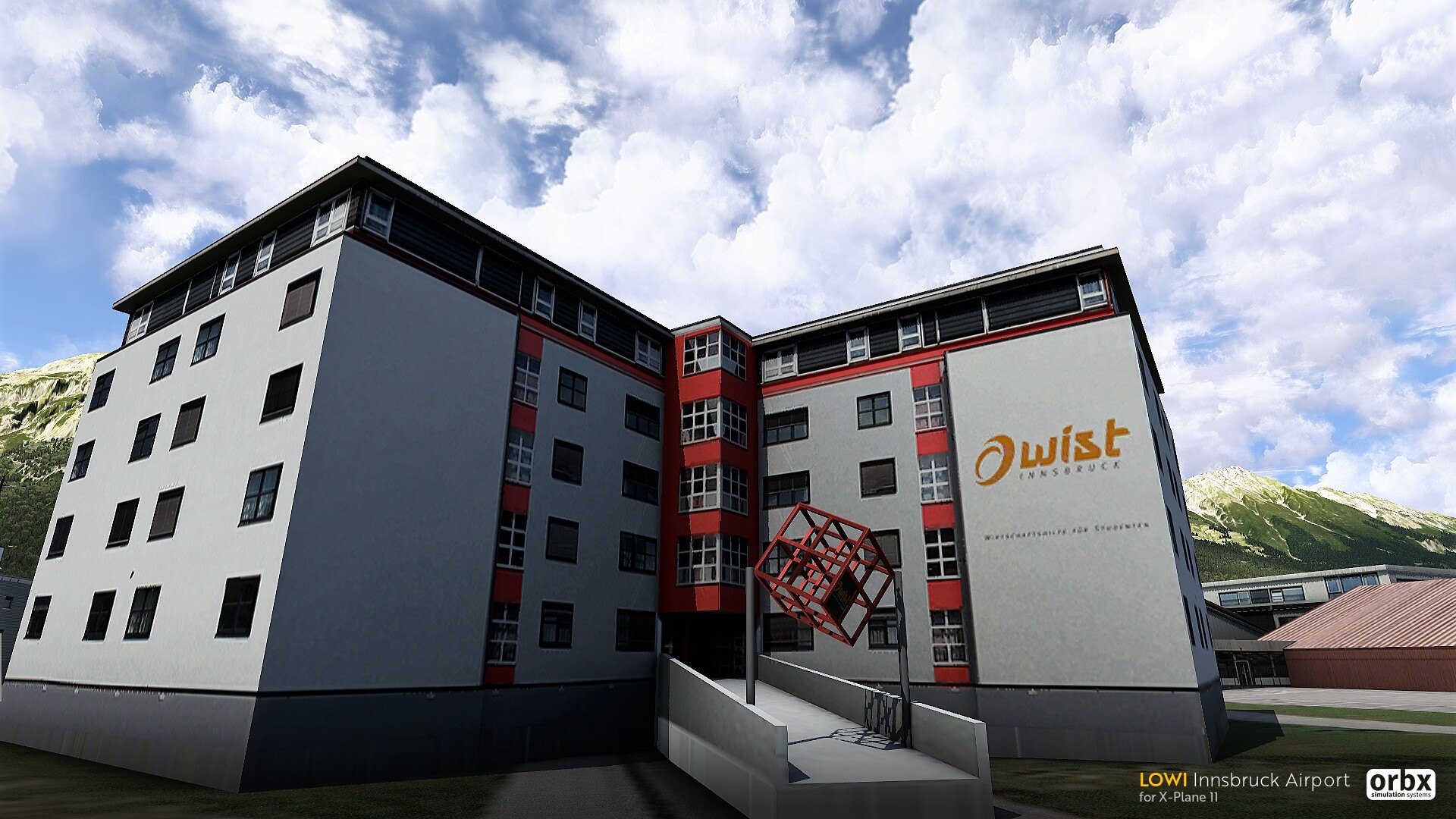 There was absolutely no need to include the detailed entrance to this apartment complex given it cannot be seen from the airside, however, it is exactly the kind of novelty that makes for a fun morning in 3DS Max! 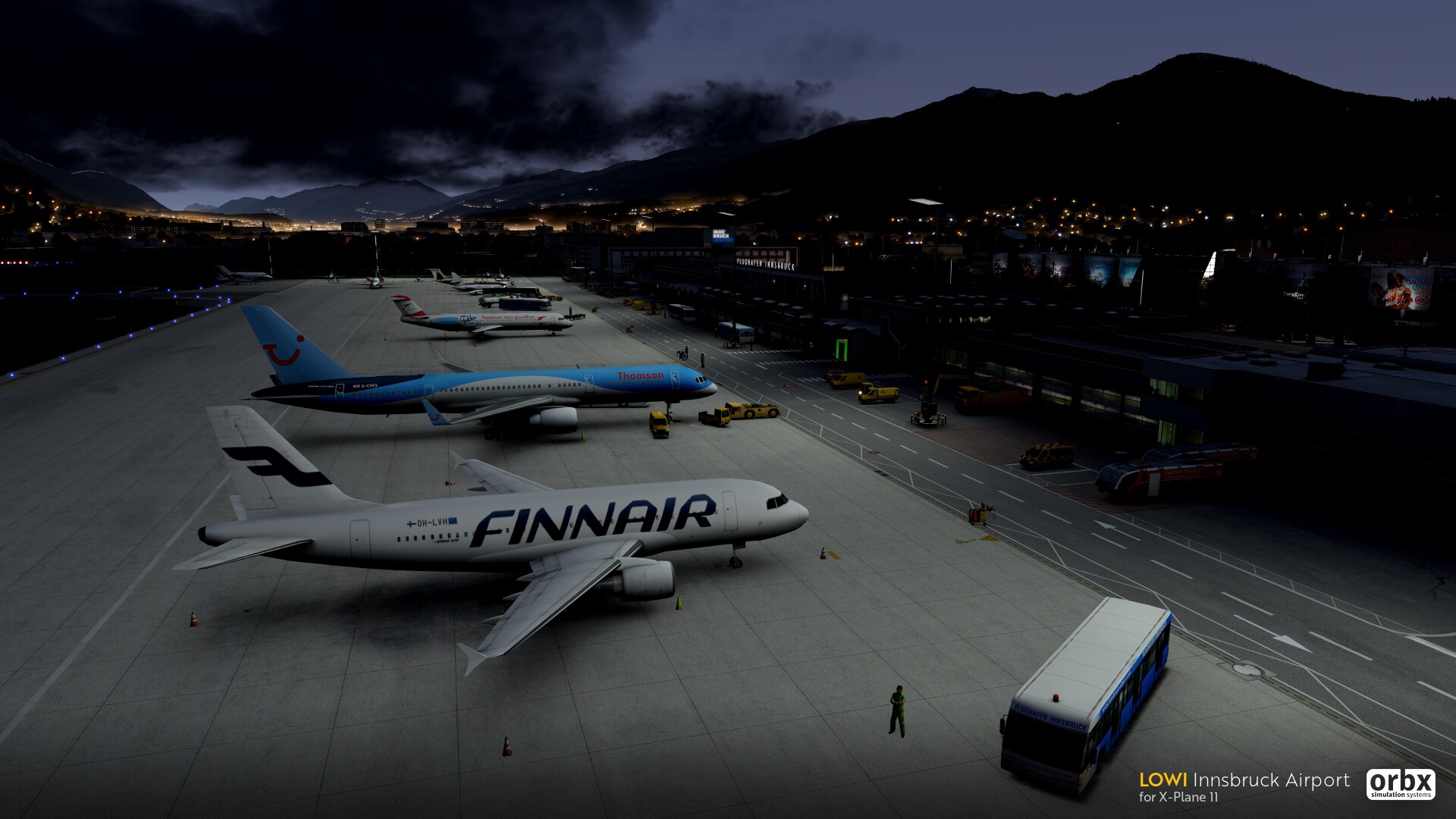 In previous versions of LOWI (and in early promo shots for this version, too!), this aircraft was featured in the now-defunct Air Berlin livery. Finnair is a regular visitor to the airport (plus I’m always a fan of a good euro-white livery!), so this was a suitable replacement. 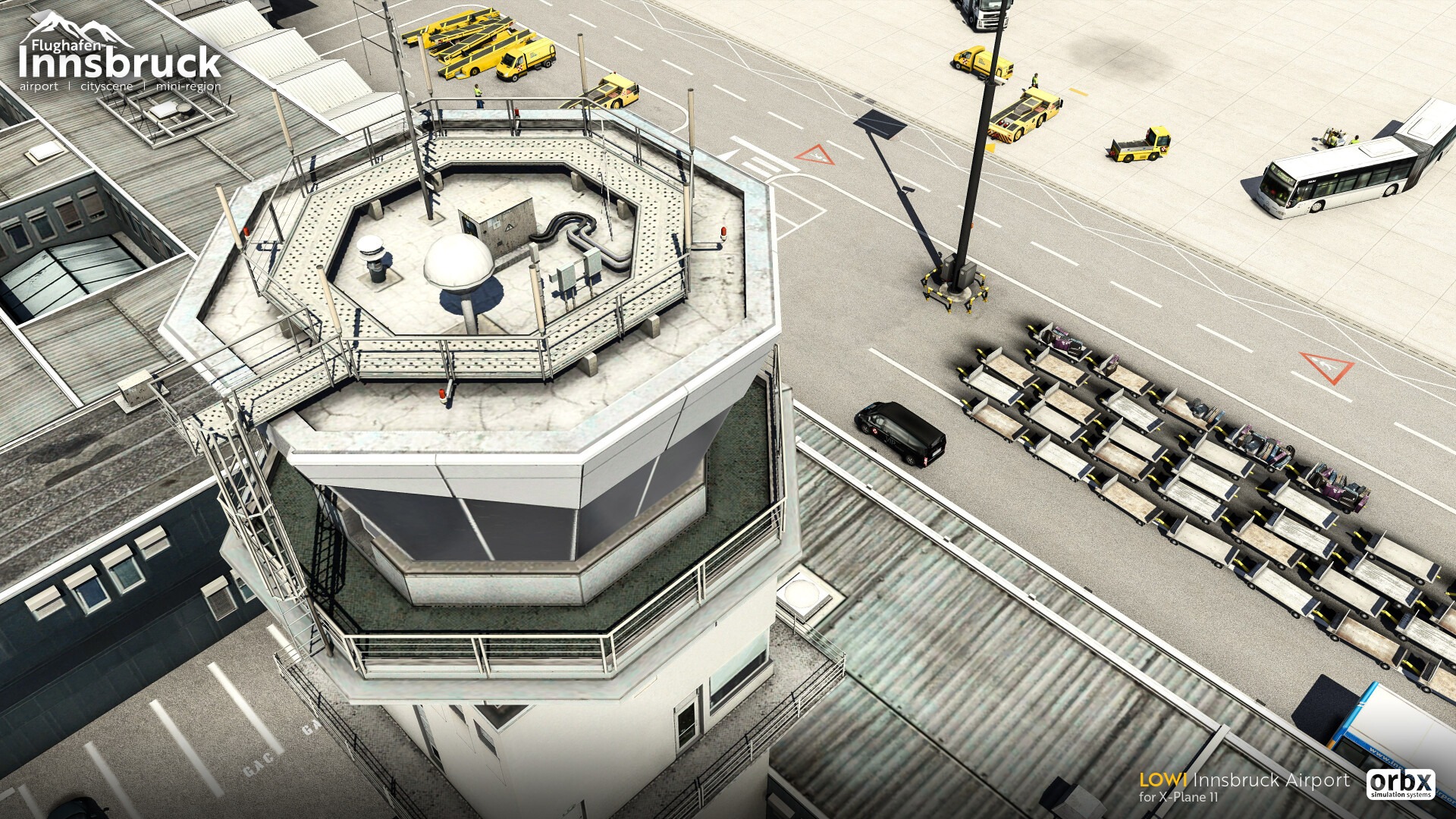 (NB – this is not an exclusive pic)
Completely unnecessary detail on the roof of the control tower, but at no performance impact and a lot of fun to make, it was worth the extra time. 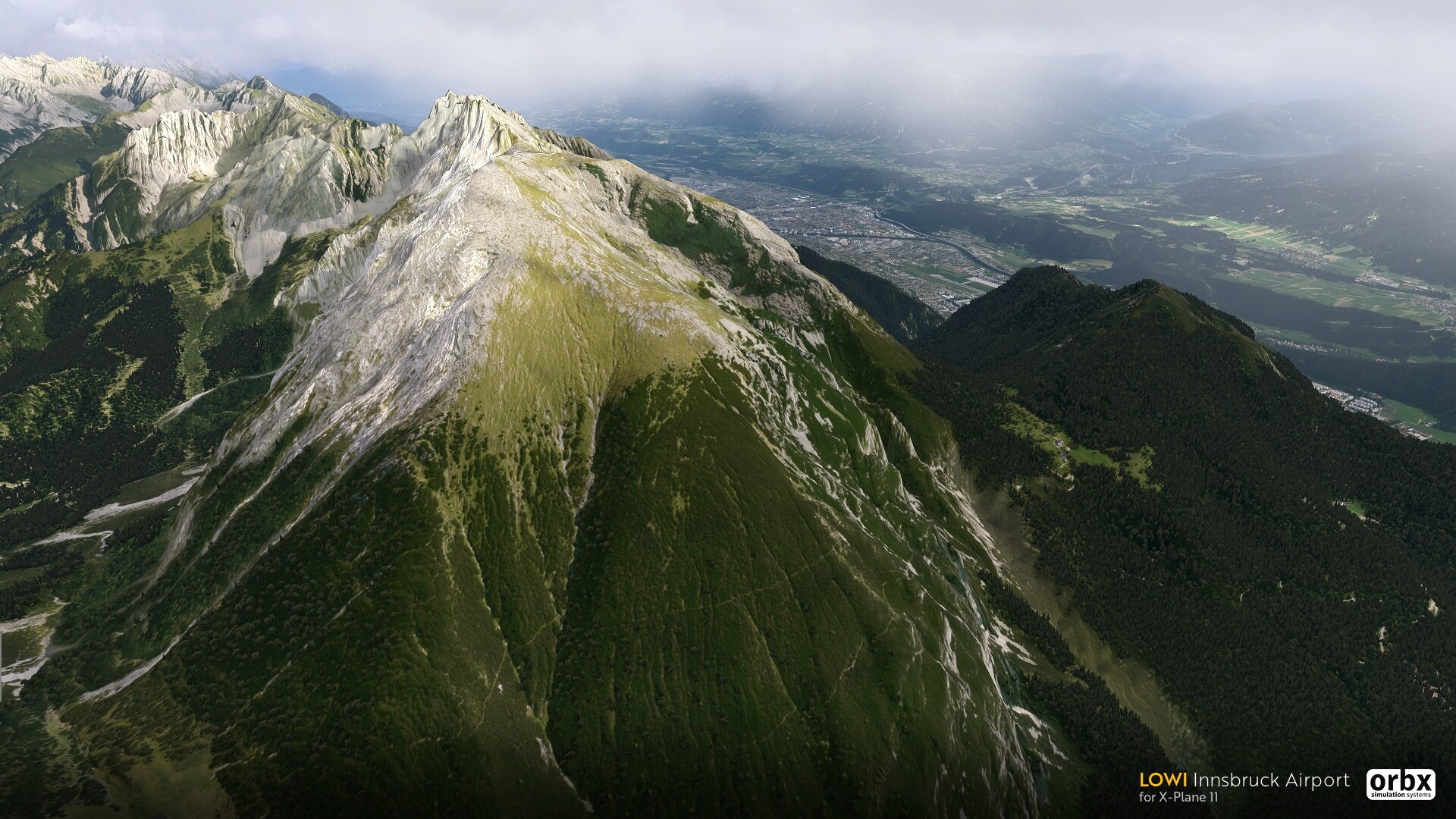 A shot from the alps just behind the airport, this really highlights the lovely rendering distance of the XP11 scenery engine. The sharpness of the terrain textures and relief mesh extend for tens of kilometers into the distance. 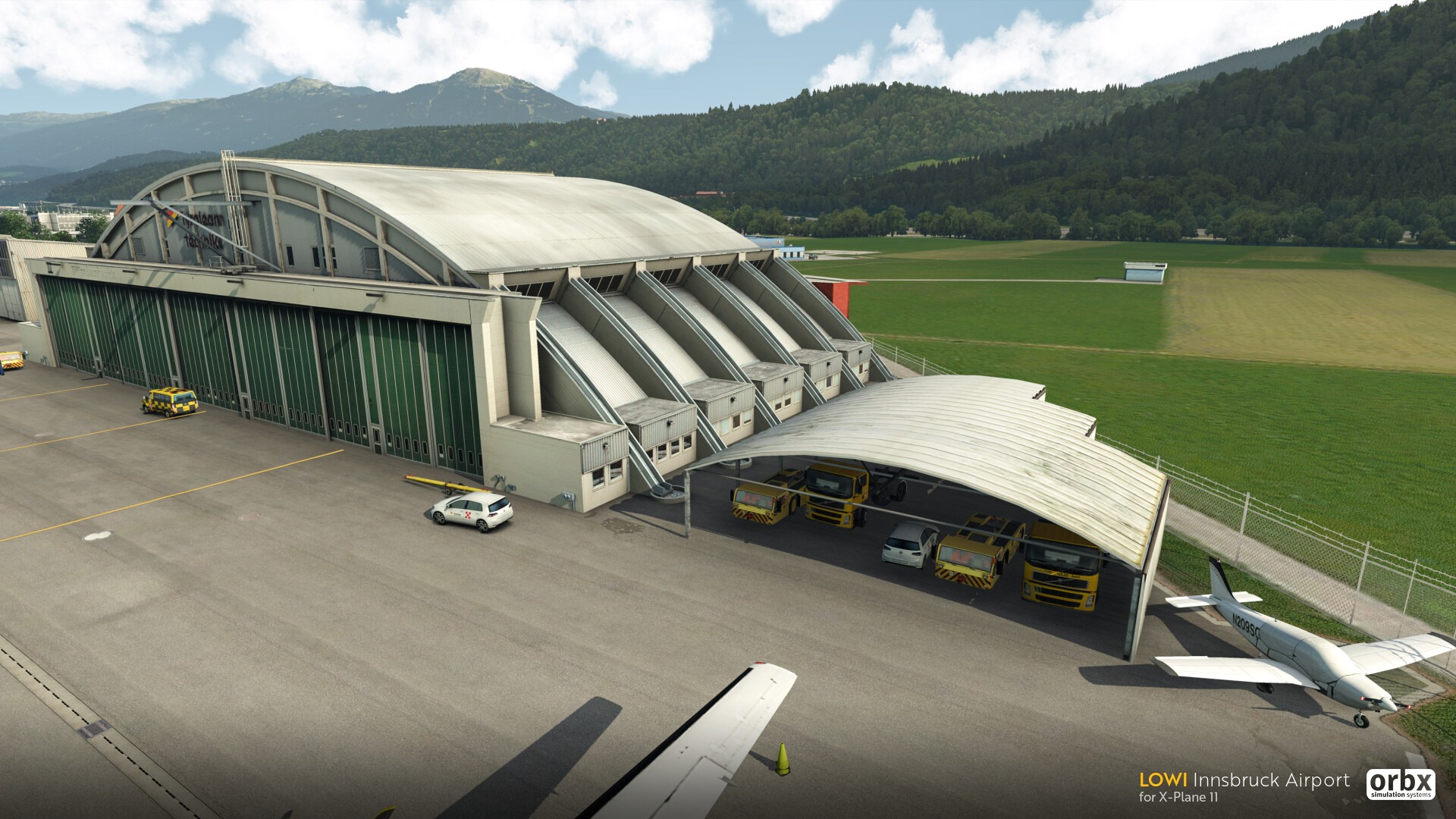 The Tyrolean maintenance hangar is definitely the most complex non-terminal model in the scenery. Like a good lego kit, this involved a bit of fiddling to get everything shaped up correctly. Also, in the corner you may notice the Piper with the US registration. This aircraft is apparently owned by a Tyrolean worker, who keeps the aircraft in this spot for most of the year, and only occasionally flies it.

So there you have it, some insight into the development of the airport, along with some tid-bits from some of Jarrad’s favourite parts of the product. We can reveal that LOWI Innsbruck will also be ready to purchase very soon. Thanks to Jarrad and the team for giving us and the community a little more than usual insight into product creation.