FSElite Exclusive: Interview with Lockheed Martin – All About Prepar3D v5

Just now, we revealed the very first information about Lockheed Martin’s upcoming Prepar3D v5. This is the first step in bringing an all-new platform built for the next-generation of simulation and training. New technologies such as DirectX 12, integration with trueSKY and more were all announced, but we wanted to dive a bit deeper into exactly what this means for the flight simulation community.

We spoke to Chris Metel from Lockheed Martin who is the current Prepar3D Engineering Program Manager. We discuss everything from how long Prepar3D v5 has been in development for, how the team will celebrate and how all these new technologies will help developers in future create more advanced products for the community.

Remember, you can read the announcement for Prepar3D v5 here and also watch the official teaser trailer on our YouTube channel.

Firstly, how long has Prepar3D v5 been in development?

Hi Calum, first off, thank you for taking the time to speak with me.  I’m excited to have joined the Prepar3D team during the development of our v5 release. Our last major release, v4, was launched almost two years ago which is our longest period between major releases.  Following the launch of a major release, we often focus on upcoming point releases, but we also started v5 development in parallel.  So, overall Prepar3D v5 has been in development for over two years, with a major push for about the last year.

Version 4 of Prepar3D brought many new features to the simulator including 64-bit, PBR and more. What are some of the standout features simulator users can expect with version 5?

Our most noteworthy feature is our brand-new rendering engine built on DirectX 12.  In addition, we have integrated trueSKY and NVIDIA WaveWorks 2.0 middleware, refreshed the entire globe, included sloped runway capabilities, and added additional aircraft, landmarks, wildlife models and more. Prepar3D v5 is the start of a whole new simulation and training engine with so much to get excited about.

One of the most fundamental changes to Prepar3D is the introduction of DirectX 12. Firstly, could you summarize what this is? Moreso, how does this impact the flight simulator? Will it bring improved performance, enhanced visuals and so forth?

Users can definitely expect both improved performance and enhanced visuals with v5. With DirectX 12, our development team can transition more work from both the CPU and the GPU, which has an improved ability to process multiple threads. It allows us to implement our own command line list and buffers to the GPU. Basically, this allows the Prepar3D to use the hardware more efficiently.  Therefore, our users will see an increase in performance and improved realism – with and without new hardware. It gives us the ultimate control to address issues that are unique to earth-size simulations.

How can developers tap into DX12 going forward to enhance their add-on offerings to the community?

What’s great is that for most content developers, nothing new is required to tap into the power of DirectX 12.  All models and effects are being rendered using our new engine, which automatically takes advantage of the CPU and GPU optimizations we have put in place. One-way developers can get more out of the new engine is to upgrade their models to use our Physically Based Rendering (PBR) materials.

Additionally, using the Prepar3D Development Kit (PDK), software developers can create their own custom rendering effects and textures using C++ and DirectX 12.  In fact, our Virtual Reality module is developed using the PDK rather than internal interfaces to ensure that third-party hardware vendors could develop their own advanced Extended Reality (XR) integrations as an add-on, too.

Another new addition is the all-new trueSKY integration. Why was this decided to be implemented with the new version of Prepar3D? How will this enhance simulation and training for pilots?

We continue to strive to increase realism in Prepar3D; trueSKY is another step in that direction. By integrating Simul’s trueSKY, we increased the level of realism previously not seen in Prepar3D’s lineage.  With trueSKY, the user gets the most realistic sky, weather, and clouds possible, providing a more immersive and true to life flight experience. Additionally, the backing data in this weather system will allow new capabilities like high-fidelity weather radars to be created.  What users will appreciate is that we didn’t remove our legacy weather engine, so they can switch via a simple checkbox for any reason.  This maintains our moving forward but remaining backwards compatible philosophy.

Will developers be able to integrate their current weather or texture enhancement solutions with trueSKY? Has there been changes to how real-world weather is currently injected into the simulator from the current servers?

By default, v5 does not offer real-world weather, however, our Software Development Kit (SDK) supports all the required interfaces to permit integration of real-world weather. We look forward to seeing what third parties create using our open architecture.

What is dynamic ocean? How does this work and what impact will it have for training purposes?

The dynamic ocean is our integration of Nvidia WaveWorks 2.0. Beyond our traditional flight simulator roots, Prepar3D is regularly used it to deliver multidomain simulation and training exercises. This includes Live, Virtual, and Constructive (LVC) training where water realism is important.  This integration is the next step in providing a better baseline simulation engine as we add new maritime-relevant training content. We are also looking forward to seeing seaplanes interacting with the new water engine.

Prepar3D v5 will offer enhancements to the default airports with new real-world data. How up to date is this data? What sort of data changes can we expect in the new version? Will this also include new airports that weren’t in V4 like new Beijing Daxing and new Istanbul Airport?

All airports have been visually improved via updated airport and land class textures as well as new PBR textures for runways, taxiway, and taxiway signs. We reviewed major airports and updated them when appropriate. In addition, we selected and sloped about 20 airports to showcase our SDK terrain tools which now support sloping.  I anticipate these numbers growing as we release future point releases.  While Beijing Daxing and Istanbul Airport are not included in v5, we are excited to introduce our new default airport, Randolph Airforce Base in Texas, which was developed by Orbx. We expect Beijing Daxing and Istanbul Airports to be included in upcoming point releases.

Have you been working closely with developers with the development of Prepar3D v5 so that they can easily bring their add-ons to the new simulator quickly for the wider community?

Yes, we pride ourselves on an open and thriving ecosystem of third-party developers. Many of our major third-party developers have been part of our extensive v5 beta program to not only begin developing new content but to provide feedback on the new features.  In addition, backwards compatibility is very important to us. With the new rendering engine there are some visual differences, specifically with lighting that may have had some small impacts to third party textures, dynamic lights, and other effects. Our third parties have been using the beta version of v5 to make these adjustments and quickly release their v5 versions near our launch. 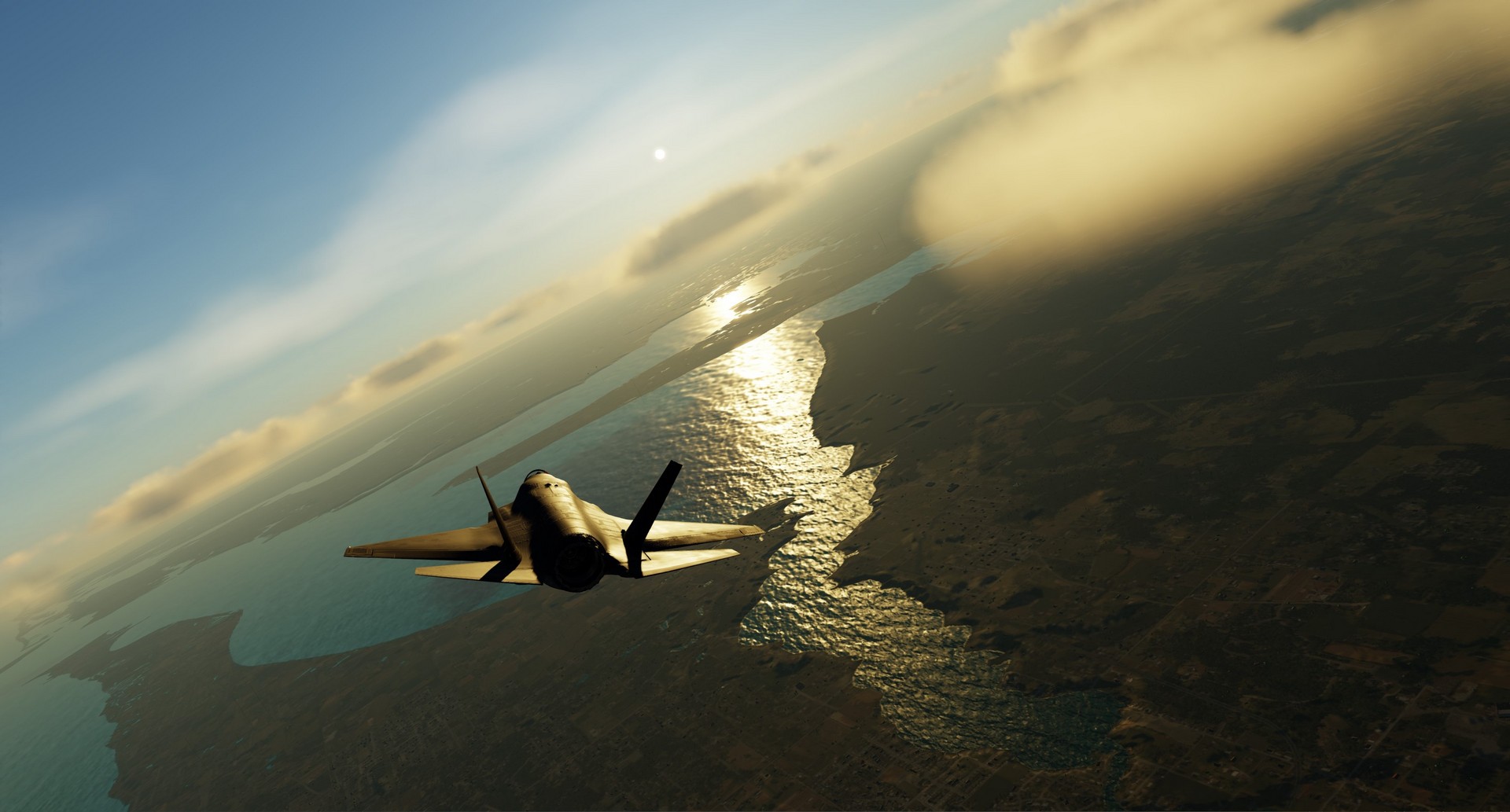 Another feature on many simmer’s minds is the inclusion of sloped runways. Whilst they have always been possible in previous versions of Prepar3D, you’ve made it clear this is a new feature which will support AI. Was this based on feedback from your current user base? Was there any other features added based on feedback?

Right. One of the largest new Software Development Kit (SDK) features is the ability for developers to slope airports. This allows our third-party developers to develop or update their airports with realistic slopes while providing more control with blending airport elevations to surrounding terrain.

Regarding user feedback, our team actively monitors the Prepar3D forum, community forums and industry trends to determine our product roadmap.  Every feature and update is based on where the community would like to see the product go.  For the almost 10 years, Prepar3D has been a product that has partnered with the flight sim community and in 2020, we strive to increase that engagement to ensure the flight sim community feels connected with the Prepar3D team as we work to meet their evolving needs.

After release, how do you plan on celebrating?

We really get into the countdown to go live. We’ll be online together for the countdown and the launch. That feeling of satisfaction that our work is out and helping people train is the greatest. The best part is we have only used a fraction of the new engines capabilities and look forward to benefit from these capabilities as v5 development continues.

Thank you Chris for your time. Best of luck with the release next week on Tuesday, 14th April 2020.