by Calum Martin on 7th May 2019 Developer MonthOriginals

Welcome to Developer Month 2019. Between April 8th and May 8th 2019, we will feature a variety of developers, publishers, community personalities and more who will tell us their story. From written interviews and blog posts to video interviews and more, we have curated a range of interesting content to maybe even inspire you to be one of these developers in future years. Please enjoy Developer Month 2019 as much as we enjoyed putting it together for you.

We couldn’t have put together Developer Month without the support of all the developers & publishers involved. Also, huge thanks to Thrustmaster for their assistance in sponsoring Developer Month.

TFDi Design are well known for their wonderful 717 product. Released back in 2017, the product has gone onto become an established product within the community. Of course, TFDi Design are much more than that single product, what with innovations such as RealLight and TrueGlass. Their next product PACX is due out soon, but in the meantime, we speak to both Collin and Brandon from the team about some of their highlights of working in flight simulation development.

Tell us who you are and what you do within TFDi Design?

Collin: I’m Collin Biedenkapp and I’m the president and lead programmer. I’m the primary programmer on our projects.

Brandon: I’m Brandon Olivo! I serve as the General Manager for TFDi Corp which oversees both TFDi Design and JetStream Radio. I ensure the members of our team are getting the best possible experience out of our company, while at the same time I double as a sound engineer for various projects within TFDi Design.

How did you first get involved in development?

Collin: Well, technically, it was when I was a kid. It started with me editing the aircraft.cfg for one of the freeware aircraft I was flying at the time. I wanted the jetway to connect to the door properly and to fix some other little items like that. I made those changes and released them as an unofficial patch, and, pardon the pun, it took off. I loved the idea that something I did (even as small as that was) was being used and enjoyed by other people.

From there, the size of the changes I made grew and got a little more polished (for example, the “patch” had an installer, instead of existing as a zip file). It wasn’t long before I started learning to create things from scratch entirely.

I started off as a 3D modeler, but I didn’t get very far. A few months in, while I was working at a computer repair shop as a summer job, I received an MSDN subscription from them. I downloaded Visual Studio (the industry-standard coding environment) and figured I’d try it out. With a little help and encouragement from the guys on the team then, I made a small application for the team. It was simple (and poorly coded), but once I had a taste of defining the software, instead of working within its limits, I was hooked.

Fast forward almost a decade, and I stuck with the programming. Every project has been an adventure and has allowed me to learn an enormous amount.

Brandon: To be honest, I never would have imagined I would have been on this side of the industry! Where my relationship first started with TFDi Design, was around the finalizing stages of the “TFDi Design 717”. At this time, I was working another full-time job, and was just an enthusiast that was long-time friends with Collin Biedenkapp. At some point during a development call on skype, I overheard Collin complaining about having to “chop up 700+ sounds”. I questioned what this was related to and found the process in which the recordings were made to be rather interesting so I offered my assistance.

Well over a couple weeks later, Collin realized I had a good ear for this, and gave me an offer to complete the interior audio along with some various exterior sounds including the GPU. This was my first jump into this industry, and I’m glad the opportunity arose! 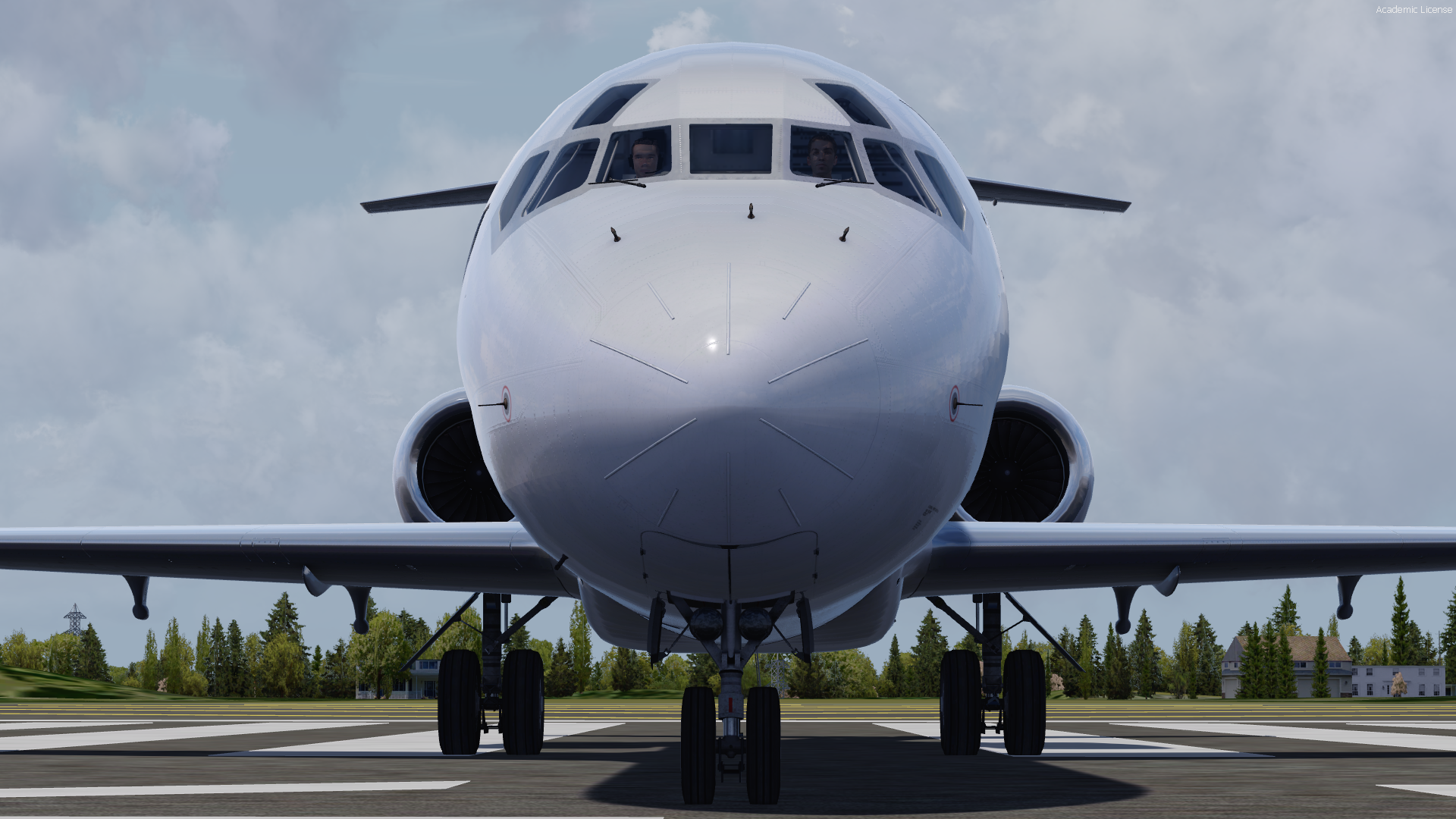 What hobbies outside of flight sim development do you have? How have they impacted what you do for your development?

Collin: When I’m not working on code, I’m a musician and weight lifter. I do my best to keep my personal life and professional requirements separate, but there have definitely been times Brandon and I have had meetings in between workouts.

Brandon: I’m a DJ/producer! Being a DJ, compared to what I currently due for TFDi Design, are almost polar opposite, but I love it! It gives me the opportunity to see a bit more than just my work space on the weekends. I get to experience a little bit of a rock-star life for the weekends I get booked, then I come home and restart on Monday. I’ve always had a passion for music. Being able to explore my hobby acts as a refresher and gives me the break and energy I need to do what I do with TFDi Design.

Previous to the 717, your previous product was the smart ACARS system. Why did you make the jump from a utility tool such as that to a fully fledged aircraft?

Collin: We’ve always tried to avoid labelling ourselves as “aircraft developers”, “utility developers”, or anything else restrictive. We enjoy creating new things and we’ve always wanted to explore all that the development world can offer. smartCARS was created, initially, almost by accident. It was meant to be a quick, small utility but we quickly realized it had the potential to be much more. We also wanted to create an aircraft the way we wanted to see one, and that was our motivation for creating the TFDi Design 717.

Your release of the 717 was met with considerable community feedback. How did you take that and use it to improve your product over multiple releases?

Collin: The feedback and criticism of the product, as difficult as it was to manage at times, became a huge learning experience for us. It showed us a lot and it prepared us to handle a larger product in a wider market. We were, and are, making every effort to take mistakes we made then and inefficiencies we find in our process to refine future products. That’s what you have to do. Nobody is perfect, which means mistakes, and subsequently, feedback on them, are inevitable; the important part is how you handle them. You can see this concept applied in efforts like the Community Opt-in Beta and improvements to our testing and product presentation in the future.

How do you stay motivated as a team for developing products?

Collin: It takes effort sometimes. The best way is to remember why you do what you do. Our careers started in this industry and we have friends and fans that are excited to see what we can do. As life changes, it’s easy for other commitments and new directions to put a strain the team, but, for me, it’s the little moments that remind me why I do this. It’s important to celebrate the victories and turn the losses into lessons and focus on what’s possible, not what isn’t.

Can you tell us about a cool moment you remember or that stands out to you? Was there ever that ‘wow’ moment from a product you’ve been working on?

Collin: There have been a lot of cool moments. Personally, the most “wow” moment I had was when we announced TrueGlass at the Flight Sim Show in Cosford in 2017. I was introducing the company and preparing to start the announcement, and I said something to the effect of “you may know us from the TFDi Design 717; I’m curious, how many of you do know us?” and the majority of the (packed) room raised their hands. That was a very humbling moment for me and it’s a feeling I’ll remember for the rest of my life.

You’re currently working on PACX. How did they come about? What you most excited about?

Collin: PACX, like smartCARS, didn’t start off as a project. It was initially a quick utility I was going to create for Brandon. He was switching to Prepar3D v4 and he wanted something to essentially play sounds and handle drinks/meals during the flight, so it didn’t feel like he was alone. I spent the afternoon and created that utility for him, but I realized we could do so much more. We then started planning it out and came up with what has now become PACX. It did go through several name iterations, but we landed on PACX. I’m most interested to see how PACX is used and expanded. We’ve put in some serious effort to create SDKs and the ability to interact with PACX at a variety of levels and I can’t wait to see how other developers and users add it into their workflow.

Once PACX is released, how will you celebrate months/years of hard work?

Collin: I’m not even sure yet. I think a fitting plan would be to take some time and fly with it. I don’t get to as much as I used to, so it’d be awesome to do a few flight lines and experience it in its full glory.

Brandon: Use it! As Collin mentioned earlier, this started out due to the lack of this program existing. I knew I wanted something more than just voices. I wanted this aircraft to feel alive, and Collin said he could make it happen. I’m just as excited as you guys are for this to be released!

What advice would you give to aspiring developers?

Collin: I have two points I want to cover. The first is simple: go for it. You miss every shot you don’t take and the perfect moment you’ve been waiting for never happens – it’s up to you to make a moment perfect. The second point: don’t be afraid to be wrong. You learn more from failures than you do from successes. Don’t ever let yourself think you’ve learned all there is to learn about a topic.

Brandon: Collin said it best. Go for it. Don’t sell yourself short and set realistic expectations.

Check out TFDi Design’s website here, where you can also pick up their 717.

Thank you once again to Collin and Brandon for taking part.

The final Developer Month interview is tomorrow and we conclude with the developer who made this whole thing possible. Of course, we’re talking about our sponsors: Thrustmaster.